Using the "does not equal" operator in Excel

If you're familiar with logical functions in Excel, you've probably used statements to execute different actions based on variable input criteria. In the majority of these scenarios, it's likely that you've used Excel's "=" logical operator to determine whether two values in your formula are equivalent to each other.

But there are some situations in which you may need to figure out whether two values are not equal to one another. This is possible using the  function, but there's an even easier way: use the "does not equal" operator to determine whether two statements are not equal. Read on to find out how.

This tutorial will assume that you know how to use Excel's and boolean functions. If you're not familiar with those, stop by our and tutorials before proceeding.

The "does not equal" operator

Let's take a look at the "does not equal" operator in action to see how we can use it in a simple formula:

The above formula outputs , because does not equal . Let's take a look at another simple example using integers:

This formula outputs , because is equal to .

Of course, "<>" doesn't have to be used on numbers. It can also be used on strings of text. Can you tell why the following formulas output the given results?

Hint: For the last example above, you'll have to read up on how the function works if you don't already know it!

Combining <> with IF statements

The "does not equal" operator is useful on its own, but it becomes most powerful when combined with an function. Let's take a look at a practical example to see how this works.

The following example uses the function. If you haven't used statements yet, check out our statement tutorial first. 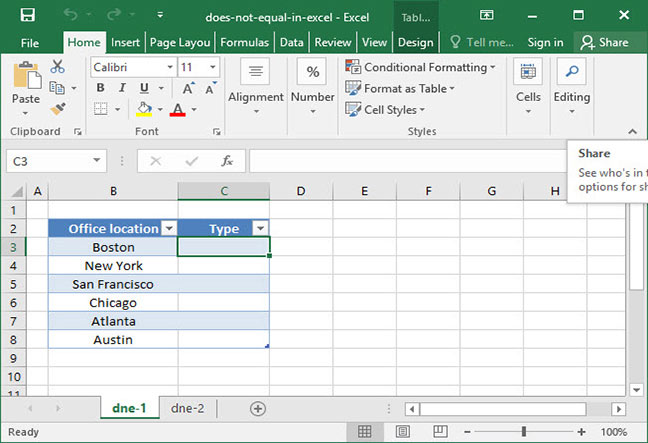 The spreadsheet above shows a list of SnackWorld's office locations around the country. The company's headquarters is in New York, and all of the other offices are local. A SnackWorld manager wants to add a column to the spreadsheet that dynamically outputs whether a given office is the company headquarters or a local office.

To do so, we could use the following formula: 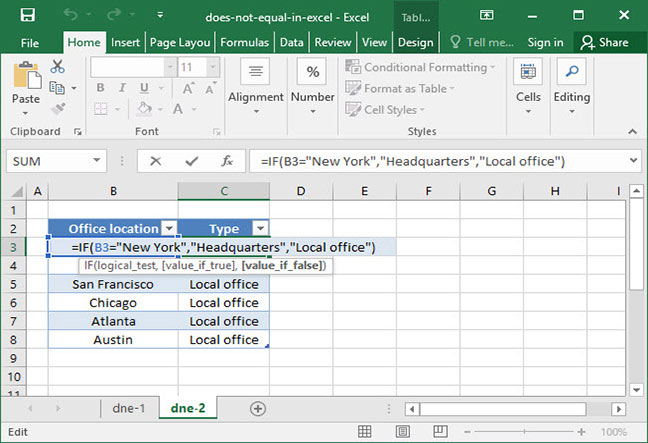 Note that this formula outputs for all the offices names that do not equal ; but, it outputs when it sees that the office name is equal to .

Note that the above formula could be rewritten as follows, using the equals operator (=) but switching the order of the statement's and arguments:

Is there any advantage to using the "<>" operator instead of the equals sign? Definitely. When you're using statements, you can swap around the order of arguments and generally use either "=" or "<>" in your formulas. But when working with more advanced conditional formulas — in particular, and — you'll likely bump into scenarios in which only "<>" is sufficient (for example, if you want to sum up sales for all offices for which the office name is not "New York").

If you found this article useful, consider taking a look at our full article on logical operators. We'll teach you how to use the full range of logical operators, including "greater than" and "less than", in your formulas.