Many Excel users think that the function is the program's most powerful conditional tool. But it turns out that there are a whole class of even more powerful functions that allow you to perform conditional calculations on large ranges of data. To begin, we'll start by learning about the most simple of these: the function.

Excel's allows you to perform a of a particular range of data, but only include numbers for which certain conditions are met. For example, say we have a database of sales by product category. We can take the of all products in the category by using a function. Let's take a look at how it looks.

Take a look at the following table, which shows SnackWorld sales for various types of item, including , , and : 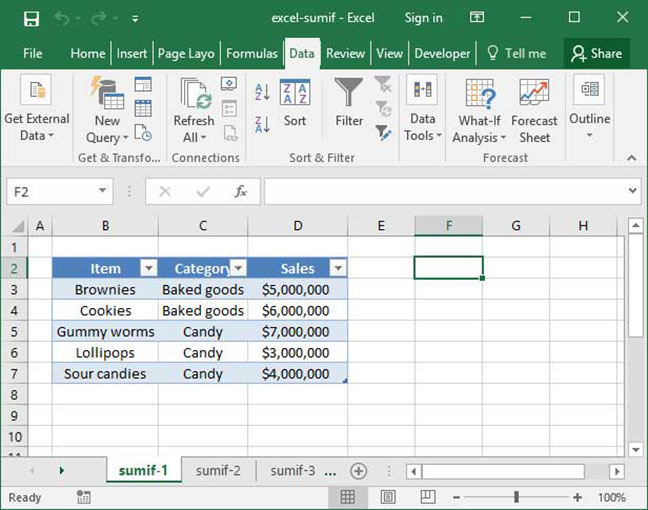 Let's say we want to find out how much money SnackWorld made from selling all items in the category. With a large spreadsheet, it would be a pain to sum these all up manually. Fortunately, we have the function to assist us.

The formula for the function is as follows:

Notice that the argument at the end of the function is optional. We'll use that argument with most of our applications of , but first, let's take a look at what happens when we leave it off.

With just two arguments, the argument is very simple. It takes the sum of every number in the given , provided that the given for that number is met. For example, consider the following formula, which sums up customer numbers by month: 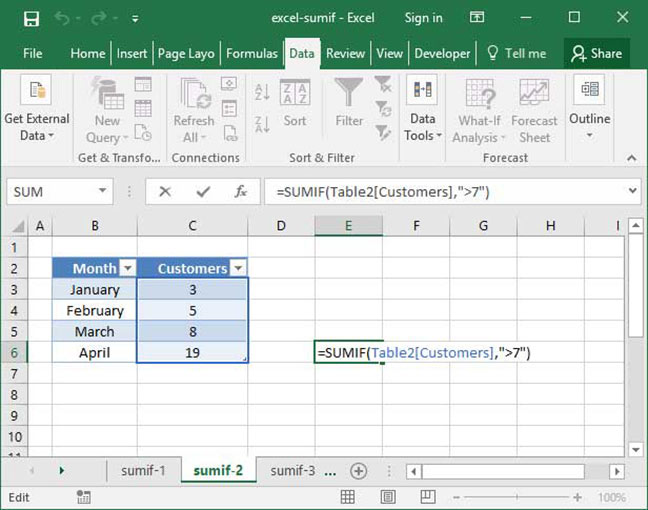 What's going on here? First, Excel looks at the cells , which it knows we want to take the of. However, there's a condition: Excel looks at the column to see whether there are any cells that we should exclude from the . As it turns out, the we've set here is . This means that Excel should only include cells whose value is greater than or equal to 7 in our . Therefore, the only cells it includes are and — which contain the values and . The final output is .

What's with the quotes and ampersand around the ? It turns out that the  argument takes a string, not a logical expression. It's a bit confusing for beginners, but that's just the way it's built! We enclose the sign in quotes () to turn it into a string that Excel recognizes. We then use the ampersand () sign to join this string to a regular number, 7, which we also want to include in our conditional statement.

Instead of writing the condition as , we could also write it as , including the number as a part of the string we provide to the function. However, we find that it's easier to always use the notation containing , as it'll make things simpler when we include cell references in our conditionals. For example, take a look at the following formula, where we've included a cell reference rather than a hard-coded number in the : 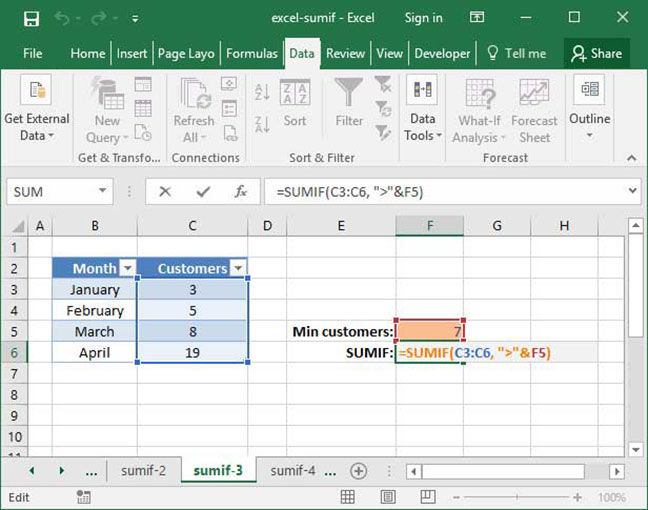 See how we use the sign to join the string with a cell reference to ? If we included the argument within the quotes, the formula wouldn't work, because Excel would treat it as a string rather than a cell reference.

What we've done so far is nice, but not particularly useful. Why would we only want to take the sum of if the number of customers in any given month is greater than seven?

That's when the third argument of comes in: . This argument will allow us to take the sum of a range that's different from our condition. In other words, will take the of everything in , but only if the given is met for everything within the provided.

To see how this works, let's take a look at the spreadsheet from the beginning of this tutorial, which lists product sales by item and category:

Let's construct a formula with three arguments to take the of everything in the category: 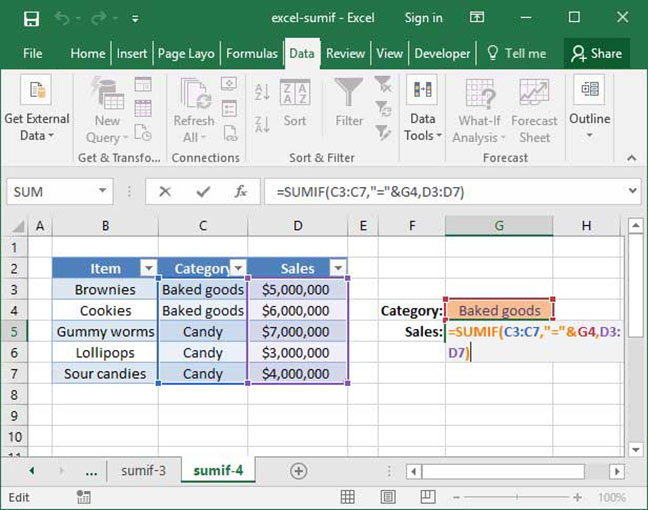 As you can see, the function takes the sum of everything our our (), but only if the corresponding cells in our () meet our stated (). Since cell contains the phrase , only cells and are included in the sum, for a total of .

There's another shortcut we can use here: when using the sign, we don't need to include the part of our condition. If Excel doesn't see any logical operators, it will assume that we are trying to ensure that the value in a particular cell is equal to what we have in our . So, the above formula can be rewritten as follows:

That's it! Now you can use the function to selectively take the sum of items in a range based on a particular logical expression performed on other cells.

Now that you're comfortable with , you may be wondering whether it's possible to sum a range based on multiple criteria rather than a single one. You're in luck — our tutorial will show you how!