Finding a rolling average in Excel

Calculating a rolling average (also known as a moving average) is easy in Excel using the formula combined with absolute and relative cell references. A rolling average helps smooth out trends over time, particularly when your data shows cyclicality by week, month, or year. Let's take a look at what rolling averages are, and how you can calculate them in Excel.

If you're not familiar with the difference between relative and absolute cell references, take a look at our cell references tutorial before proceeding!

What is a rolling average?

In many business scenarios, data like product sales may fluctuate significantly due to cyclicality or seasonality. This fluctuation can make it very difficult to tell from looking at raw data whether it is trending in a positive or negative direction. Take, for example, the following scenarios:

Both of the problems above can be solved by taking rolling averages — the of several points of data rather than a direct, single-point comparison. Consider the following:

In short, rolling averages are used to smooth out data over a significant period of time and account for seasonality and cyclicality in trends.

Calculating a rolling average manually in Excel is simple: we create a new column, use the function to calculate an average over a specified period of time, and take advantage of Excel's relative cell reference functionality to ensure that our average moves as our data set progresses.

Let's look at an example using daily sales numbers. Take a look at the following sheet, which shows daily SnackWorld sales of cookies: 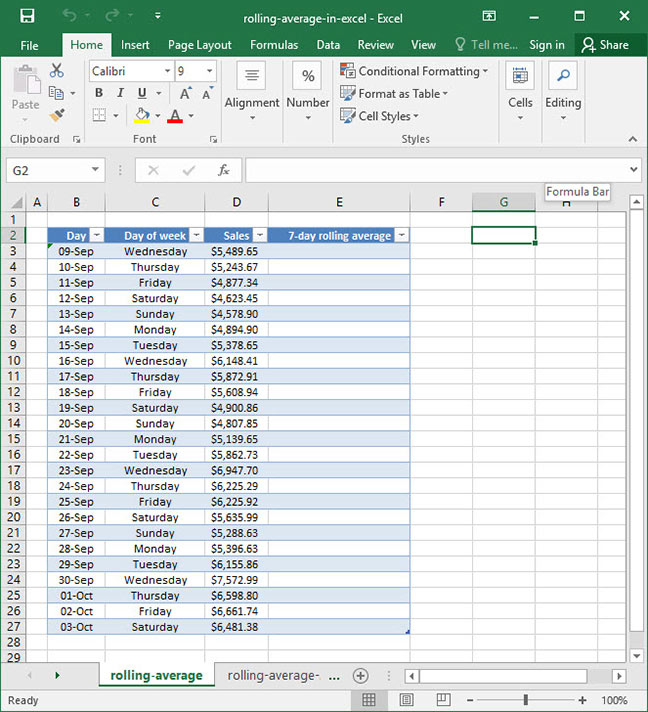 As you can see, cookie sales vary widely by day, peaking mid-week when lots of customers are ordering products. Let's use a rolling average to smooth out this trend and figure out what's happening to sales on a longer-term basis: 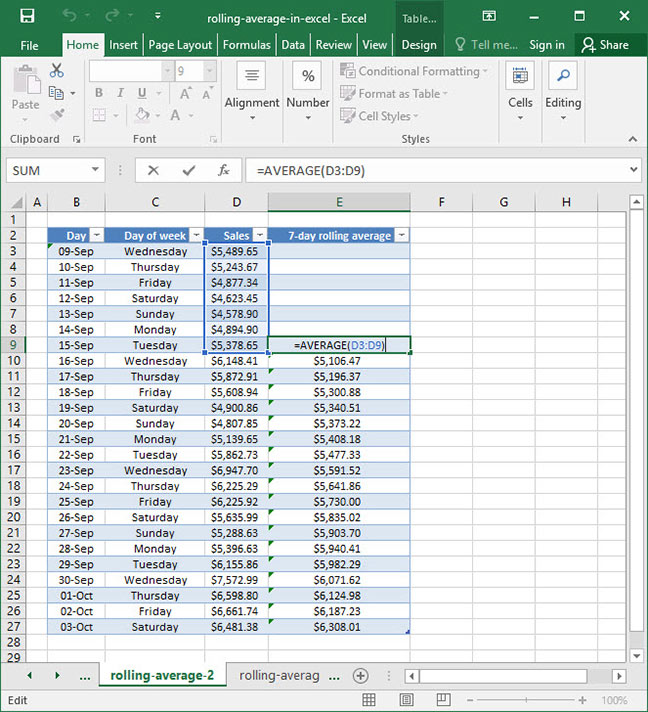 There are a couple things to note in the formula above:

First, we start entering our formula in cell , because September 15th is the first day on which we have a full seven days of data to average. It wouldn't be possible to take a 7-day rolling average starting on September 14, because we have only collected six days of data at that point. Whenever we calculate a rolling average using this method, we'll need to exercise manual judgement to figure out where in our data to start.

Second, we use a relative cell reference to calculate the of the past seven days of data starting on September 15th by averaging the cells . The output of this formula is . Note that as we copy and paste this formula down into other cells, the range being averaged shifts because we are using relative cell references. For example, the formula copied and pasted to cell will take the average of the range , because that represents the trailing 7 days of data: 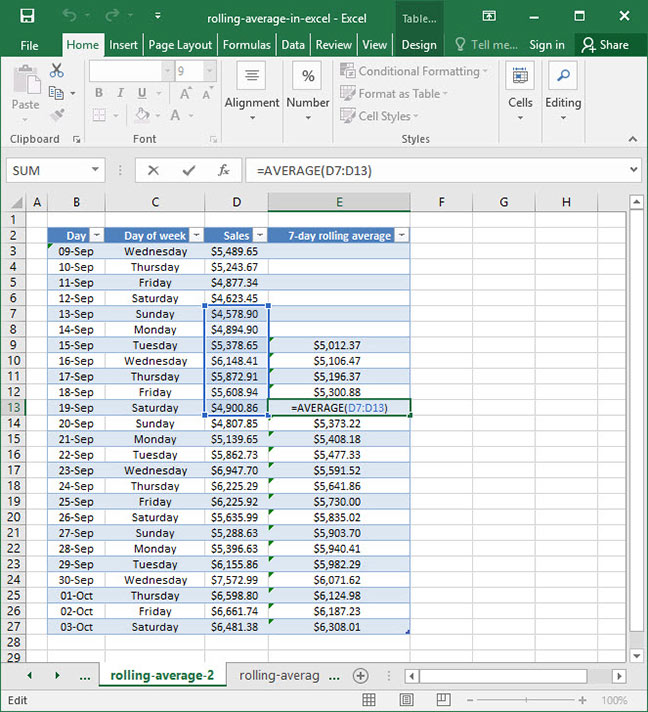 With our rolling average calculation, we can clearly tell that weekly sales are trending consistently upwards. This method of calculation has drastically simplified a set of data that was otherwise very difficult to interpret.

We calculate all of our rolling averages manually so that we can exercise full control over the results. But if you'd like for things to be more automatic, you can use a tool called the Analysis ToolPak to speed things up. Here's how it works:

First, open up the Analysis ToolPak by going to Data > Data Analysis: 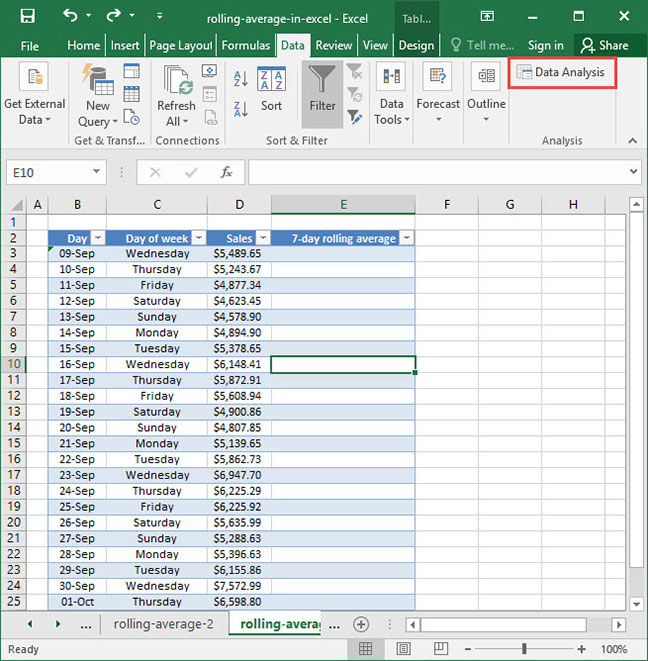 Next, select the "Moving Average" option from the ToolPak menu: 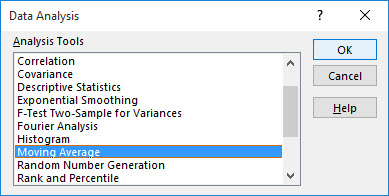 In the dialogue that follows, enter the input and output cells for your average, as well as your interval. In our example, our input cells are , since those cells represent our numbers, and our output cells are , since that's where we want our to go. In the Interval input box, we put the number , because we want to take the rolling average over 7 days. There are a number of additional options in this dialogue you can play around with, including a feature that will automatically generate a chart from our output. 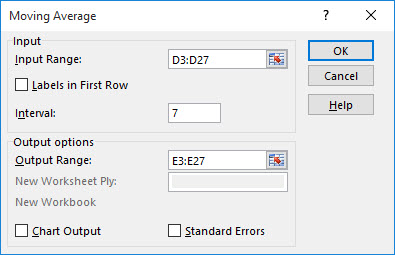 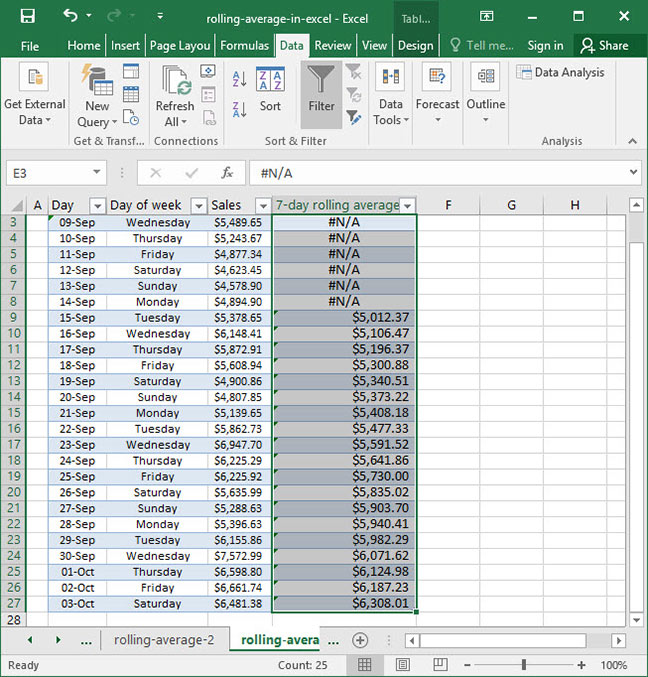 Now you know everything you need to calculate rolling averages in Excel. Use this handy tool to smooth out your data and control for seasonality and cyclicality when conducting analyses!