Excel contains a number of useful functions for ranking values in a range — in other words, figuring out which value is the highest, the second highest, etc. But there are a number of functions used for ranking, and the difference between them can often be confusing. In this article, we'll explain Excel's function and talk about some of its variants — including and . We'll also discuss what to do in the event of a tie.

Before we begin, let's look at an example of when the function might be useful. 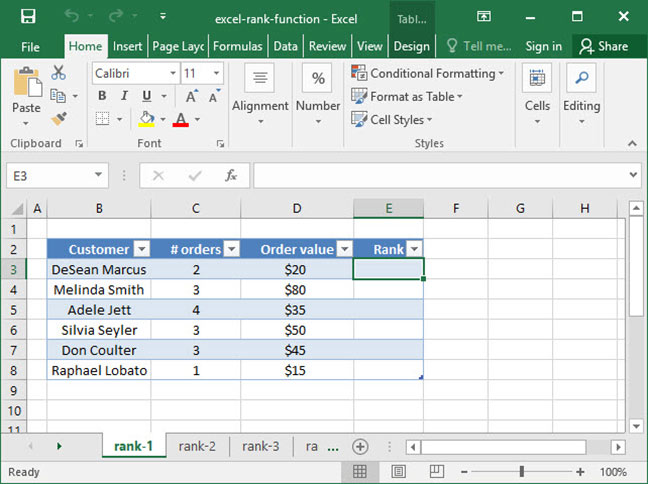 We can solve our analyst's problem using the function. The syntax of is as follows:

Let's take a look at the function used in practice to solve the SnackWorld analyst's problem. Recall that we want to use to find each customer's rank by number of orders placed: 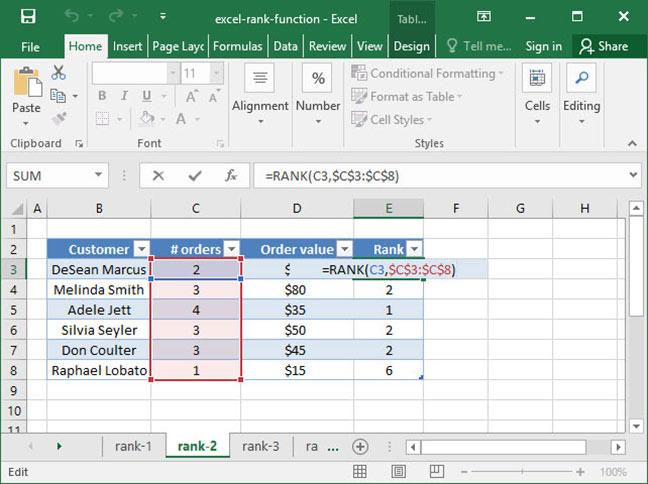 There are a couple of additional points to note here. First of all, notice that we've used relative and absolute cell references in our formula to lock the range and keep rankings consistent throughout the table. If you're unfamiliar with how these references work, check out our tutorial on absolute and relative cell references for more information.

Second, note that the input range to our formula, , contains three of the same values — . In the event of a tie, as we have here, the formula assigns each of these values the same rank — they are all tied for nd place. Note that the next highest rank is , because there are three values tied for nd. Oftentimes, this is an appropriate solution to the tie problem — but in some cases, you may want to break ties. We'll explain how to do this later in the article.

What if we wanted to rank our customers not by number of orders, but by order value? We could easily do that by switching our to the column: 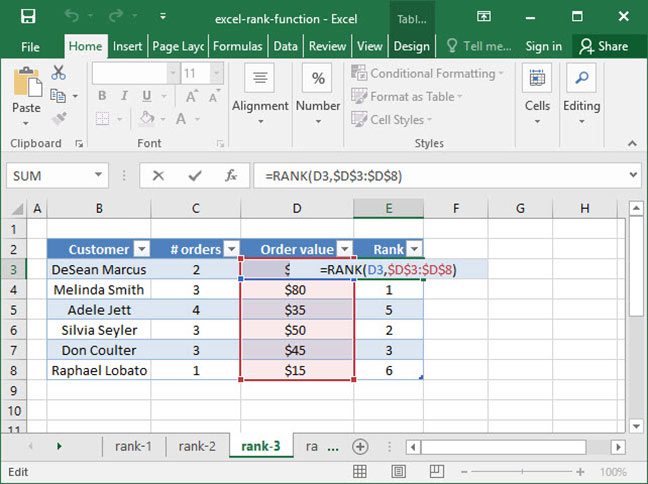 The above formula outputs , because the order value is the th highest in the range . Note that we don't have any ties in this case, because all of our s are different.

We could also use the optional parameter to rank our customers from least valuable to most. Let's set to so that Excel assigns the value to the lowest : 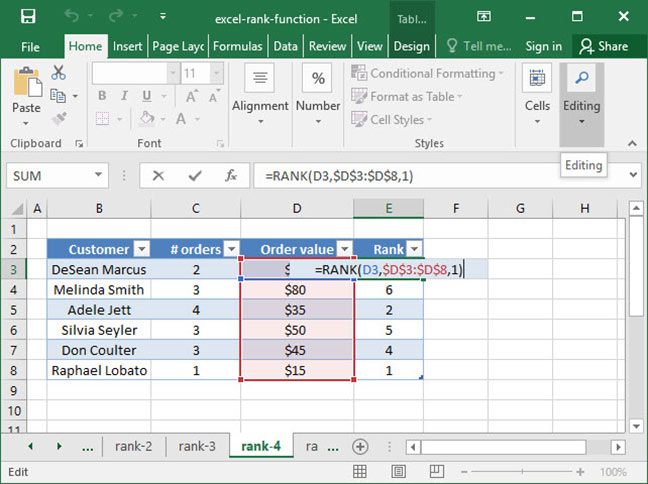 The above formula outputs , because the order value is the rd lowest in the range .

So you've got a handle on — but what are those and functions doing in Excel's inventory? Here's the answer:

and are exactly the same function, but was introduced in Excel 2010. This means that if you're writing spreadsheets for versions of Excel prior to 2010, you should always use the function. Otherwise, feel free to use it with interchangably.

Also introduced in Excel 2010 was the function. This function is very similar to , except that in the event of a tie in the rankings, instead of setting all of the ranks to the highest tied value, it sets the ranks to the average tied value. Take a look at the following example, in which we've used to rank our customers by : 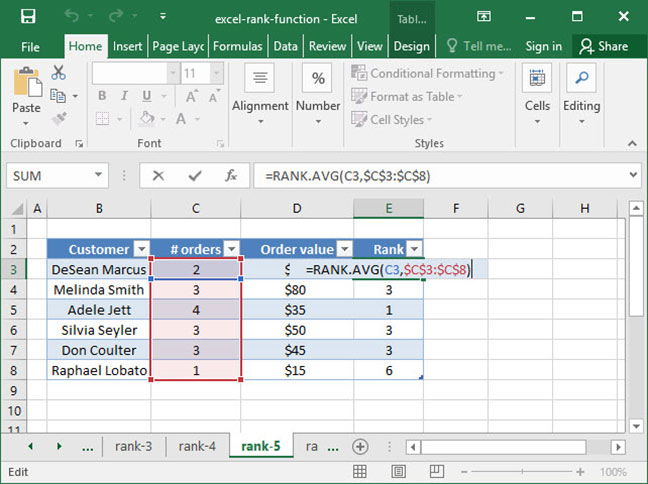 Note that since our last example, the output for cell has changed from to . This is because we're now using the function, so Excel takes the average rather than the highest rank in the event of a tie. The cells , , and are all tied in this rank average at positions , , and . So rather than outputting the highest value, , as would do, outputs , the average of , , and .

Breaking ties with the RANK function

As we've seen, doesn't deal with ties particularly well: it ranks all tie values in the same place. But what if we want to use a "tie breaker" range to determine the winners in the event of a tie?

We can do this, but it requires expanding our spreadsheet a bit and using some tricky number manipulation. Read on to find out how! 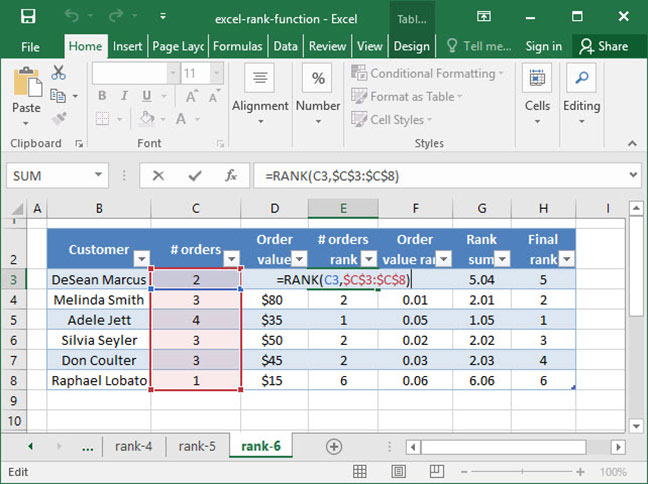 Next, we'll add a column to by order value. But there's an extra step: we'll also divide this by 100. We are going to add this decimal to the rank to come up with a combined ranking number that is different for each of our tied customers. 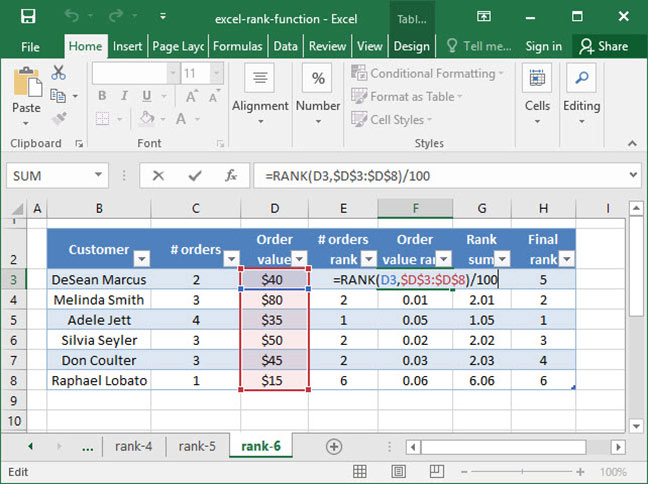 Next, we create a column that sums the two s: 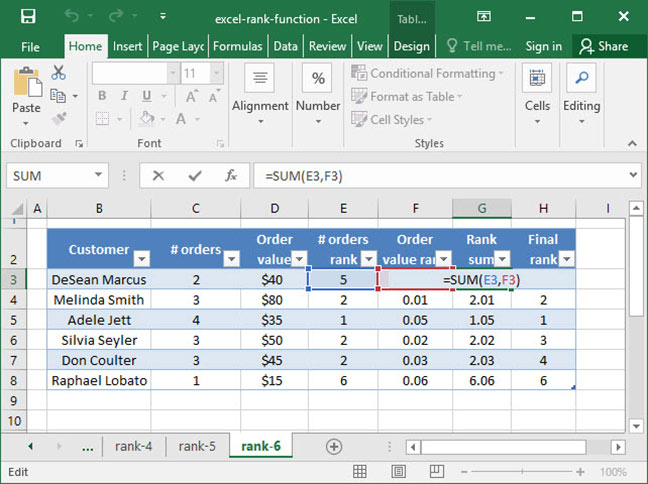 Now, we have a list of s that are all unique. The customers who were initially tied in terms of now have slightly higher or lower numbers due to their different s.

Finally, we run one last function on this new column to generate a final ranked list and break ties. Note that we'll use as the optional modifier, because we want the lowest values to be ranked first: 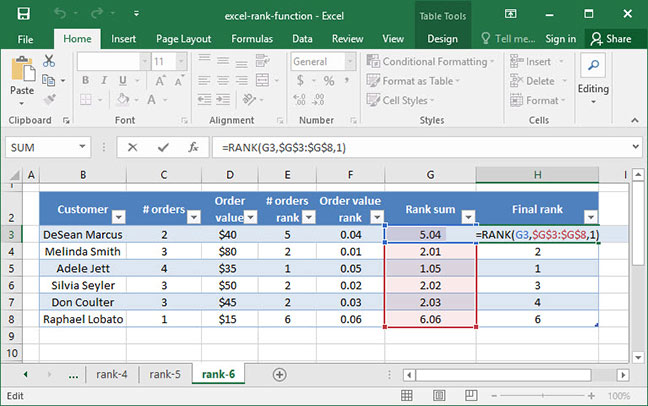 And there you have it! As you can see, breaking ties with the function is rather complex, but perfectly possible with a couple of extra columns in your table.

Questions or comments on the function or tie breakers? Let us know in the Comments section below!